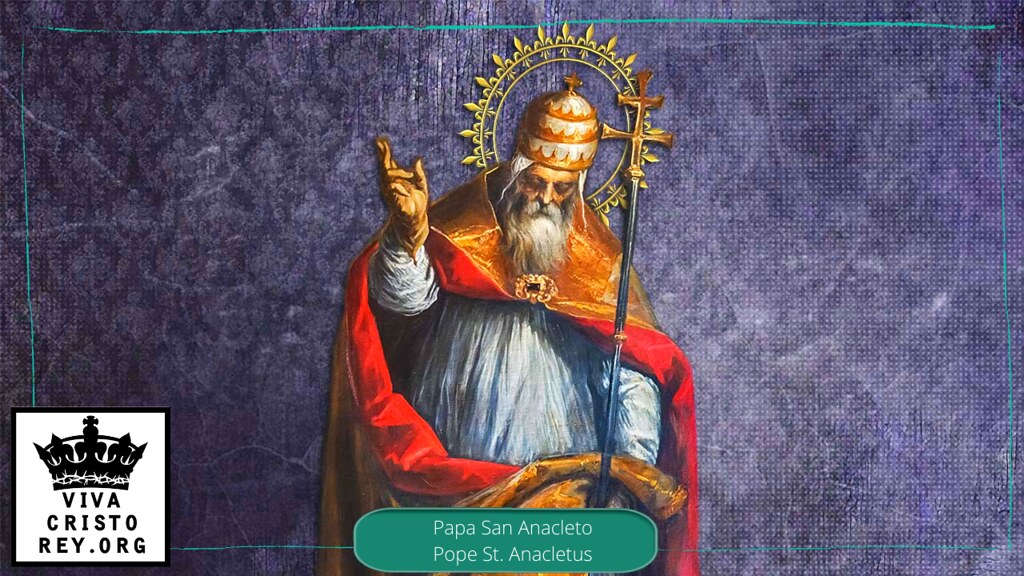 The second successor of St. Peter. Whether he was the same as Cletus, who is also called Anencletus as well as Anacletus, has been the subject of endless discussion.

Irenaeus, Eusebius, Augustine, Optatus, use both names indifferently as of one person. Tertullian omits him altogether. To add to the confusion, the order is different. Thus Irenaeus has Linus, Anacletus, Clement; whereas Augustine and Optatus put Clement before Anacletus.

On the other hand, the “Catalogus Liberianus”, the “Carmen contra Marcionem” and the “Liber Pontificalis”, all most respectable for their antiquity, make Cletus and Anacletus distinct from each other; while the “Catalogus Felicianus” even sets the latter down as a Greek, the former as a Roman.

Among the moderns, Hergenröther (Hist. de l’église, I 542, note) pronounces for their identity. So also the Bollandist De Smedt (Dissert. vii, 1). Döllinger (Christenth. u K., 315) declares that “they are, without doubt, the same person” and that “the ‘Catalogue of Liberius’ merits little confidence before 230.”

Duchesne, “Origines chretiennes”, ranges himself on that side also but Jungmann (Dissert. Hist. Eccl., I, 123) leaves the question in doubt. The chronology is, of course, in consequence of all this, very undetermined, but Duchesne, in his “Origines”, says:

“We are far from the day when the years, months, and days of the Pontifical Catalogue can be given with any guarantee of exactness. But is it necessary to be exact about popes of whom we know so little? We can accept the list of Irenaeus — Linus, Anacletus, Clement, Evaristus, Alexander, Xystus, Telesphorus, Hyginus, Pius, and Anicetus. Anicetus reigned certainly in 154. That is all we can say with assurance about primitive pontifical chronology.”

That he ordained a certain number of priests is nearly all we have of positive record about him, but we know he died a martyr, perhaps about 91.

V: Pope Saint Anacletus.
A: Pray for us.